On Friday evening about 90 fans gathered at Leif’s Lounge to warm up before the concert in Halmstad. What started out as a ‘small gathering’ of fans and an idea of ‘shall we meet for drinks and a chat’ turned into something rather quite special.

One of the highlights of the evening was when Hallandsposten came along to talk to some of the fans and take a fabulous group picture of those of us who attended the meet and greet!

When Hallandsposten arrived around 8pm – 9pm there were around 50 people on the scene but an hour or so later we had around 90 people in Leif’s, most people enjoying food from the Roxette Menu and drinking Leif’s Beer! (Just how cool are those bottles!)

The next morning on the front of Hallandsposten a picture taken outside Leif’s appeared on the front page, which you can see on Hallandsposten (or all the other websites/FB photo galleries which used it as well). Of course, some of us took the chance to take a group picture, like  Kirsten did. We would be happy if those who took a private photo of the fan-group would send it to us to post it here! I know there were some, cannot remember WHO. 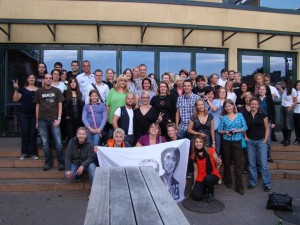 We’re hoping we didn’t keep the band and Mrs F awake to long with the late night partying!
I’ll add some more pictures from the evening when I am home tomorrow, and I am sure one of the other Roxetteblog editors will shortly write about the fabulous contest that was held at Leif’s that evening!

A translation of the article is no longer available since we were requested by Hallandsposten to remove it.