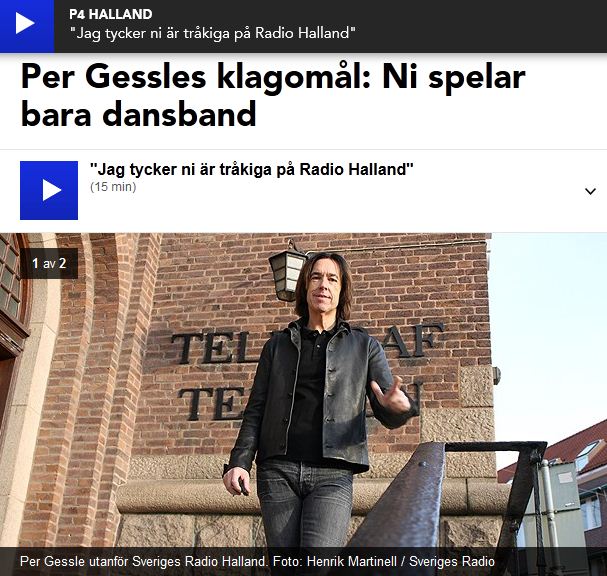 Per was a guest on Swedish Radio, P4 Halland this morning. They were talking about a letter Mr G sent to the radio 35 years ago (23rd February, 1979). You can also watch videos shot during the interview. Video 1, Video 2, Video 3.

The letter is about Radio Halland not playing Gyllene Tider often enough, just playing dance bands. He says they wrote quite a lot of letters like this. Radio Halland was special for them, since GT is from Halmstad and they thought the local radio should support local bands more. Per says he didn’t get a reply to that letter back then, he also forgot about it until 20 years later, when one day he entered the building of Radio Halland and saw it at the reception on the wall framed. He remembers they even sent postcards under fake names to have the chance to appear in Poporama (an old radio show).

Per says it was a tough time to make themselves heard, because just like now, the Swedish music industry was very Stockholm oriented. They had to use all the tools they could.

To the question when was the last time he wrote such a letter he laughed and said he stopped doing it now. By the way, some months after this letter had been written they got a contract from EMI Stockholm.

Per says he has always been doing what he loved, writing songs and playing them. He knew it from the very beginning that writing songs for others was not really his thing. He always wanted to play his songs himself.

To the question what was the biggest thing in his career when he is looking back he says it’s Roxette and the 4 Billboard No. 1’s. He says they were pioneers with their tours, touring in South America in the 90’s and also in China. If he thinks about Sweden only, Gyllene Tider is of course still enormous and performing in Ullevi was fantastic, but also their gig in Halmstad in 1995 was magical, then the Återtåget tour in 1996 and playing in Örjans vall in 2004.

As usual, Per says again it’s never clear which song will become a hit or what response you’ll get regarding a song. You have to find your own style and you have to be satisfied with your songs yourself, create them according to your own taste.

Regarding autographs Mr G says he didn’t even have an autograph back in the days, just look at the letter he wrote to Radio Halland, he hadn’t even signed it. Sometimes he did sign Marie’s autographs in the past, at the beginning. George Harrison also signed the others’ autographs in The Beatles he says.

Regarding what he still wants to do before he dies, Per says he wants to work and is looking forward to a new big and long Roxette adventure. Marie is on her solo tour now, but it’s a plan to do more Roxette. To the question if we can see him on stage with Marie during her tour he says he doesn’t think so.