SVT Nyheter Halland did an e-mail interview with Per Gessle about the new albums and his upcoming summer tour. In the interview Per says one of the great benefits of being a little older and have gained experience is that he learned to relax and not to take everything so bloody serious anymore. He thinks it has never been as much fun to play music as now.

For Per the big challenge is to put something together on stage this summer and to be able to surprise even himself. He has never done anything like this before, mixing his various careers.

Per’s Nashville project has already become a unique phenomenon for Mr. G. He thinks it’s among the most personal and best he has done and so of course he would like people to listen to it. Per belongs to the album generation so he still thinks in making an LP. He had 14 songs with him in Nashville. Normally, 2-3 tracks are off automatically, then you still have a reasonably long record. But it went so well in Tennessee, all pieces fell into place surprisingly quickly and he finished his 14 songs in time. Instead of hanging in the bar, Per remembered he had 2 awesome ballads in English that could fit to do duets with American country music singers. A serious challenge! He called a few friends in the industry and found 2 wonderful singers who were available and it became the icing on the cake of his Nashville-adventure.

However, the length of 16 songs was about 65 minutes and it felt too long for a single album. The options were a double album or two separate records. He decided for the 2nd option and put the English tracks as last ones on each record. Both albums have roughly the same temperature and contain beautiful, gently produced music.

About John Holm Per says he is a real hero. Although they ran into each other a few times over the years, he met him properly first in Halmstad last winter when John played there. Then Per saw him again on one of his Stockholm gigs when John was really in top shape. That was the time when Mr. G asked John if he wanted to cooperate on Per’s new album and John wanted to. So Per sent him his demo and they recorded the song in Skåne and had a few magical hours in the studio. John has a great and generous personality and he is one of the most expressive singers Per knows. According to Mr. G, John Holm does not really know how good he is.

Per says to SVT he’s been singing a lot with Helena Josefsson on his solo albums over the years and he will still do the rest of his life if he may. Many of his songs are written for several voices so it felt quite natural to expand the palette of more than Helena. The idea of ??singing with the other singers felt new to Per and it also gives the lyrics a different perspective. Lars Winnerbäck is an awesome songwriter and performer who is admired by Per, so he was really happy when Lars wanted to cooperate. Per has known Linnea Henriksson for a while and she is an absolutely adorable person and singer with her blue tones and some light jazz funds. All the duet partners on the album changed the songs’ overall identity. It’s exciting and unpredictable according to Per.

Per tells SVT that inspiration and experience can easily go hand in hand. He feels more free than ever when he writes nowadays. He tests different odd guitar tunings, he is fiddling more in the studio, he takes his time to write more verses than he needs, he lets his gut feeling decide most of the time. He feels, slowly but surely, that he doesn’t need to prove much for himself anymore. He thinks he became kinder to himself. He doesn’t have a hit list in sight, no record label to make happy, no major commercial requirements to live up to. He has been so very fortunate in his life that his music reached out to so many and it’s really something one can’t take for granted. It has created a sort of peace in Mr. G.

About the tour and setlist Per says he is – as we all know – a great advocate of short concerts. There will of course be many kill-your-darlings, because he was going to keep the show around 100 minutes. Including hits that encourage spontaneous dancing.

Per says about consulting song choice with fans on social media sitesthat it’s really lovely with all the feedback and all proposals that come in all the time. Everyone seems to have their own favorites. Honung och guld. I Like It Like That. Varmt igen. He says they will test a lot of songs when they start rehearsing and see where they end up.

About the pre-concert playlist Mr. G says he already started to put one together and promises it will be fab. Willie Nelson and Townes van Zandt have to be on the list and little Roy Orbison too. They use Roy’s guitars on the Nashville project. Per knows Roy Obison’s son, and he came to the studio with a couple of lovely old Gibsons he thought would be fine and bless their Nashville dream. 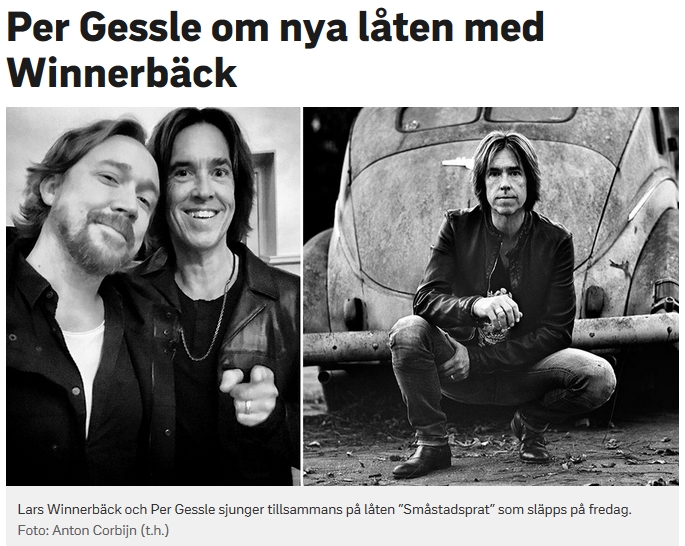