The 2nd stop on Per Gessle’s solo tour was a festival in Oskarshamn. Latitud 57 is a 2-day-long festival and Per was announced to perform there on the first day, being the Friday headliner. Weeks before the event we saw pictures of cars (1; 2) promoting the festival and we all agreed that they looked very cool and we would love to drive one like that. Who wouldn’t want a PG face on their cars? Haha. One car we also saw upon our arrival to Oskarshamn.

When we arrived, the festival area wasn’t too crowded. All the people who were around just wanted to change their tickets to armbands, so they were queueing for that. The gates opened at 16:30 and even if PG was to perform on the main stage at 21:00, we occupied our spots in the front row already after we had been let in.

First there was a show for children (Duran & Mollan) on the main stage, starting at 17:30. The kids (3-10) enjoyed it a lot and their parents too. Some parents were more active doing the choreography than their kids. Haha. Then there was a little break and set up for the next main stage act and the organizers announced that the festival for Friday is sold out. This meant 9000 people attending the event. So, Peg Parnevik was next, starting at 19:00. Her fans are mostly teenagers and we let them enjoy their ”idol” (?) from the front row. Her performance was, let’s say, a bit too far from our musical taste. Strandels, one of Per’s support acts were performing at the small stage from 20:00. We didn’t go there, we stood in the main stage front row instead, but we could hear Strandels performing very well from there too.

The crew was setting up the stage and preparing the instruments for Mr. G and the band. I think I haven’t mentioned yet that the stage background seems to stay on wheels during the whole show, so it is probably much easier to carry it around Sweden, from one place to another. The crew is still so professional anyway, they are always very fast with setting up before the gigs and tearing down after the shows. This time Åsa wasn’t there, but BoJo was testing the big stage camera in Oskarshamn too, just like in Helsingborg. However, at the point he would have had to use it (during Sommartider), there was a little technical issue, so the picture didn’t appear on the screens. He waited for someone to sort it out, but in the end it didn’t work. Never mind. It was much fun anyway!

PG and the band appeared on stage at 21:00. I decided to shoot the first ever RoxetteBlog live video and broadcast it on our Facebook page, to let you all enjoy how the concert starts. Being it the first attempt, I almost missed the beginning of Min plats. Too many buttons to click on… Haha. Fortunately, it worked out fine in the end and I’m glad you liked it. Will do it again later too, promise. 😉

The opening song sounded beautiful, didn’t it? This time there was no sign of nervousness. Per and the band played as if they have been playing together since ever and they all communicated more with the audience than at the premiere gig. In the video you can hear that the crowd was really loud, already after Min plats they let their voice and hands be heard and it got only better. 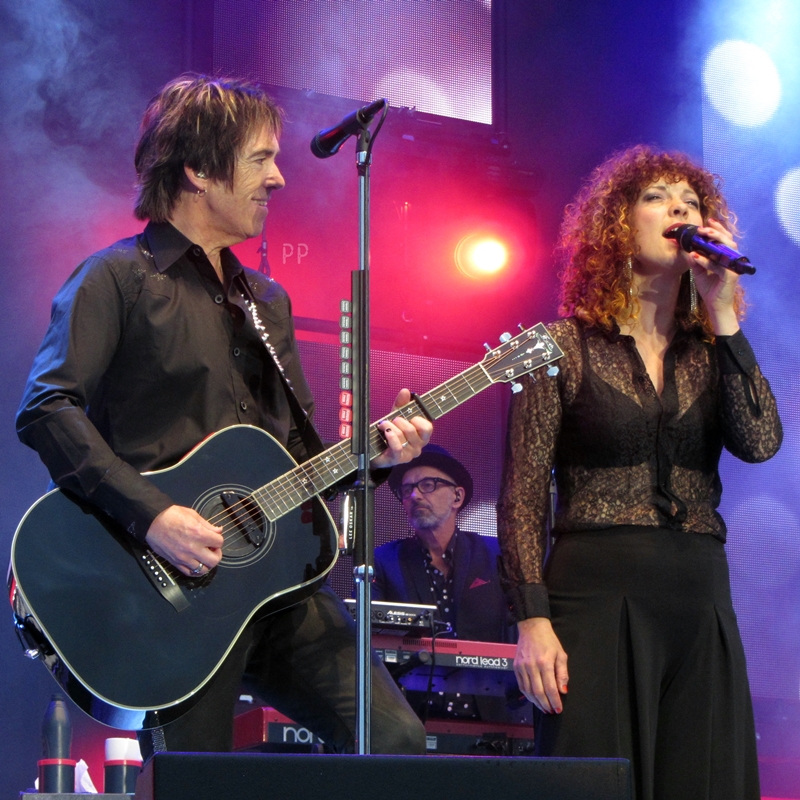 We knew that a festival show would be shorter than a usual one and that was the case indeed. PG’s concert had to end after 90 minutes as there was another band starting to perform on the small stage at 22:30. This way the setlist got shorter vs. Helsingborg, but it was still longer than the Leif’s Lounge show.

One harmonica song was out of the set (Vilket håll du än går), but fortunately, the other stayed in (Kung av sand). Honung och guld was left out too.

I won’t go into hit by hit details, but of course I’d like to mention some fun things or facts that I could pay more attention to on the tour’s second show. One of them is that I actually love how Per and the gang stop playing Juni, juli, augusti after ”För vindarna är varma då / Juni, juli, augusti” and leave a break for the cheering crowd then go on playing the song from ”Du tror jag inte ser dig så”.

Oskarshamn’s crowd knew the lyrics to It Must Have Been Love very well and were not ashamed to sing along loudly. Still, the song left us with the same mixed feelings as in Helsingborg. You know why.

Ljudet av ett annat hjärta and Spegelboll were 2 highlight songs again. They work just perfectly. It would have been even better for me if the security guy didn’t decide to take his job so seriously during Ljudet av ett annat hjärta and step up on the fence in front of me to order someone in the middle to get off someone else’s neck or so. It took some time until I had a clear stage view in front of me again. 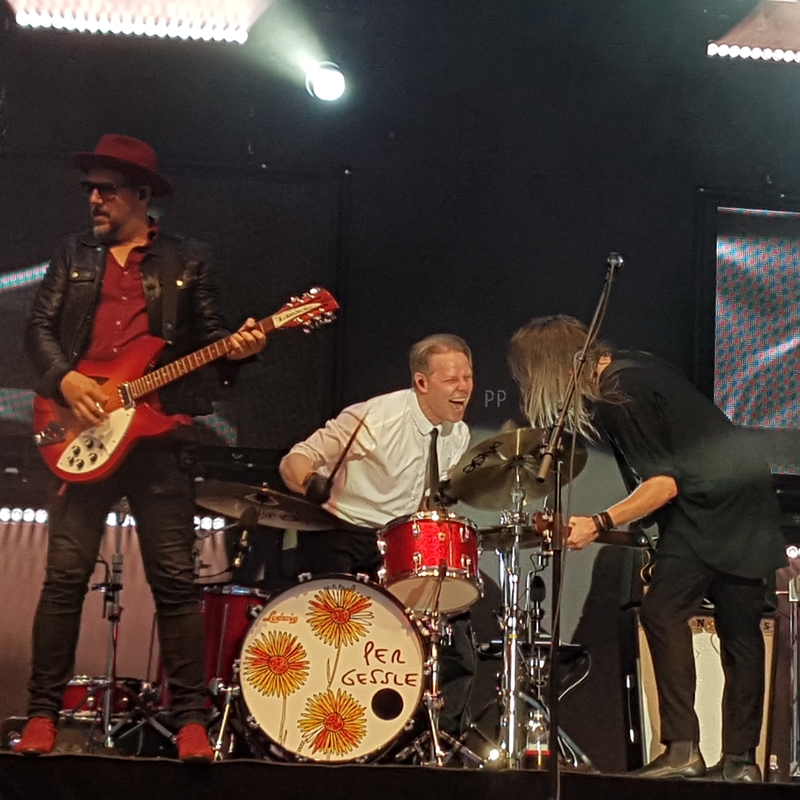 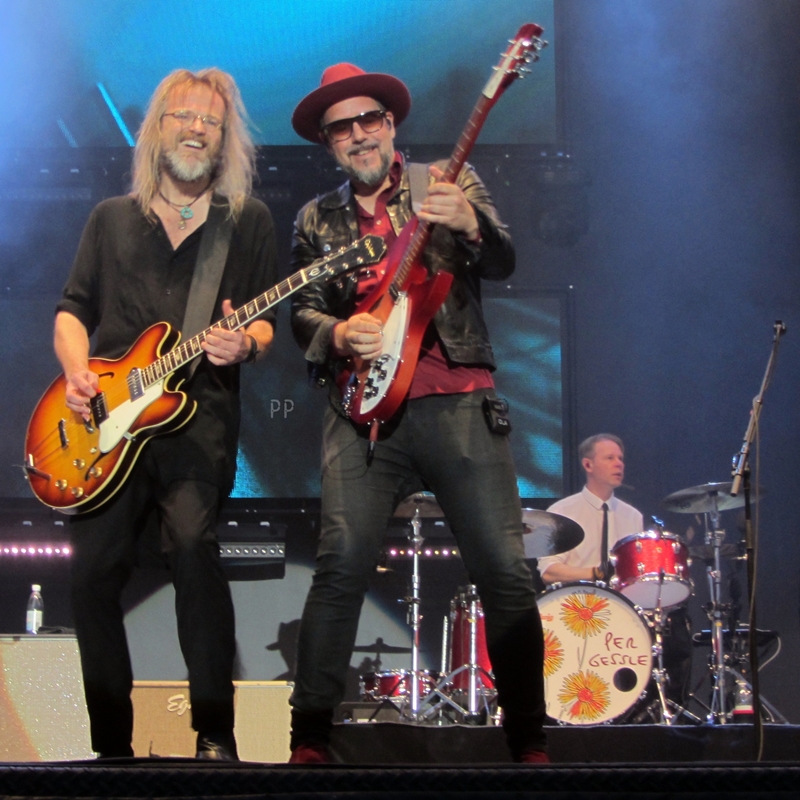 During Gå & fiska! there was some technical issue with Per’s guitar. No clue what it was. He just brought it to Micke N-S to fix it. MNS wanted to give him another guitar, but Per refused it and came back to the stage without a guitar. It was fun seeing him without any instruments, gesticulating heavily with his hands while singing. While Mr. G was moving around without the guitar, checking if MNS was ready with it yet, he bumped into either Helena or Malin (I can’t remember, I think it was rather Malin) and let her go first. It was too cute. MNS was fast fixing the guitar though and PG got it back in probably less than 2 minutes.

When I was writing down the setlist, I had to check it twice what the intro to The Look was, because I tried to memorize it was Ljudet av ett annat hjärta, but as that song was already played in the set, I got a bit uncertain. I don’t know why Chris chose that one to play as the intro too, but well. It sounded cool in Christoffer’s psychedelic performance too. Haha.

Now standing on the left side, I could see more of Ola and Andreas. They both can go real wild on stage and it’s great watching them how they enjoy playing their instruments. Ola and Chris were playing a lot next to each other and they both also went several times to Andreas to have some fun while playing. Magnus from the right joined them too every now and then. 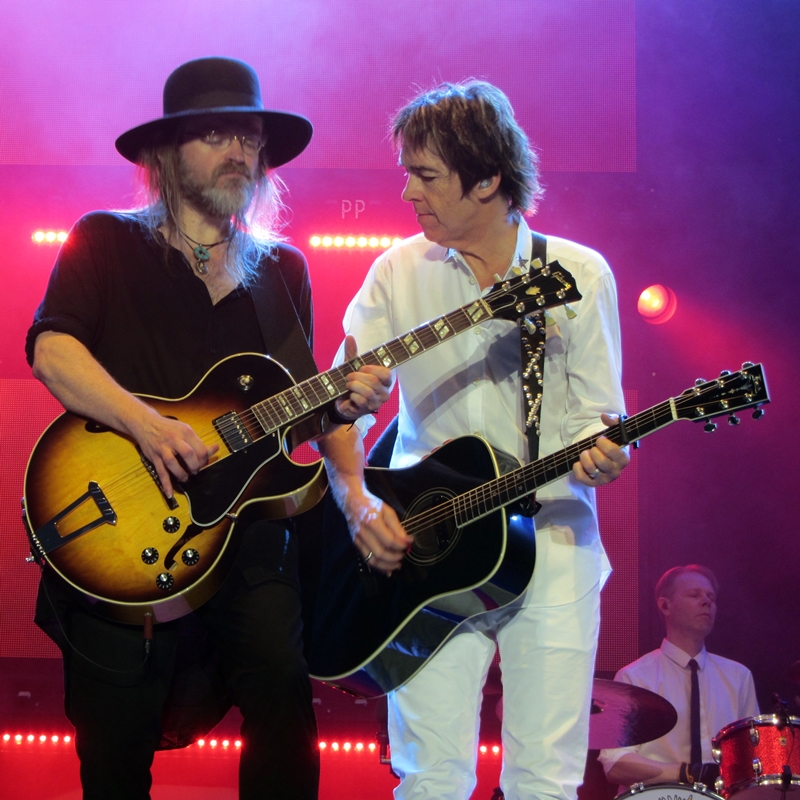 Regarding Joyride, we brought balloons with us, but as the setlist changed and this time the song came after Tycker om när du tar på mej, we realized it quite late that Joyride was the next song and we were not ready with blowing the balloons up on time. Even BoJo saw us being late and he was laughing at us. Haha. Whatever. Another fun fact, before Per started playing Joyride, he picked the acoustic plecs off the mic stand one by one and threw them to the crowd. Well, he already knew he wouldn’t need more acoustic picks during the rest of the show. Unfortunately, the shorter setlist didn’t include Tittar på dej när du dansar. We missed it much! But what was even stranger is that Småstadsprat wasn’t performed either.

The last song in the first encore was Sommartider and the 2nd encore contained only Dressed for Success. I would have changed these 2 songs and played DFS before or after Joyride and perform Sommartider as the closing song, but we enjoyed it this way too. However, there was a little technical hiccup again. When the gang came back for the 2nd encore, Per’s mic didn’t work so we couldn’t really hear what he was saying and even his guitar had a low sound. The guys fixed it in no time though and all went on perfectly fine with DFS.

Andreas was rocking the drums so hard that one of his drumsticks flew out of his hands at the end (absolutely not on purpose) and it landed in front of us in the front row. One Russian guy could pick it up, so now he is a very happy owner of an Andreas Dahlbäck drumstick and keeps it in his collection as a very nice memory of that Oskarshamn night.

Per after the show:

All photos in the article are taken by Patrícia Peres.