Per appeared on TV4’s morning show, Nyhetsmorgon today. He was Jesper Börjesson’s guest together with Niklas Strömstedt. Mr. G entered the studio at 9:53 am and greeted Frederik Zäll (from Eskobar; Frederik is usually cooking on TV4 and he was in the kitchen now again). The 4 guys also took a picture together. They mentioned that they toured together 2 years ago, Roxette and Eskobar. Then Jesper mentioned that they would chat with Niklas and PG after the news in some minutes, about the documentary Niklas did with Per.

After the news they came back at 10:10 am and shortly talked about the fact that Per saw Bruce Springsteen on Broadway and he thinks it’s a very good show.

Then the guys were talking a bit about Niklas Strömstedt’s Christmas show and then about the documentary Niklas did with Per. It will be broadcast on TV4, December 18 & 19, ”Gessle enligt Gessle”. Jesper said Per is a bit mysterious, doesn’t talk too much about his private life. Per said it’s conscious. He wants to express himself through his music. He said, Niklas asked questions in the documentary as a friend, as another musician, so it’s a bit different. 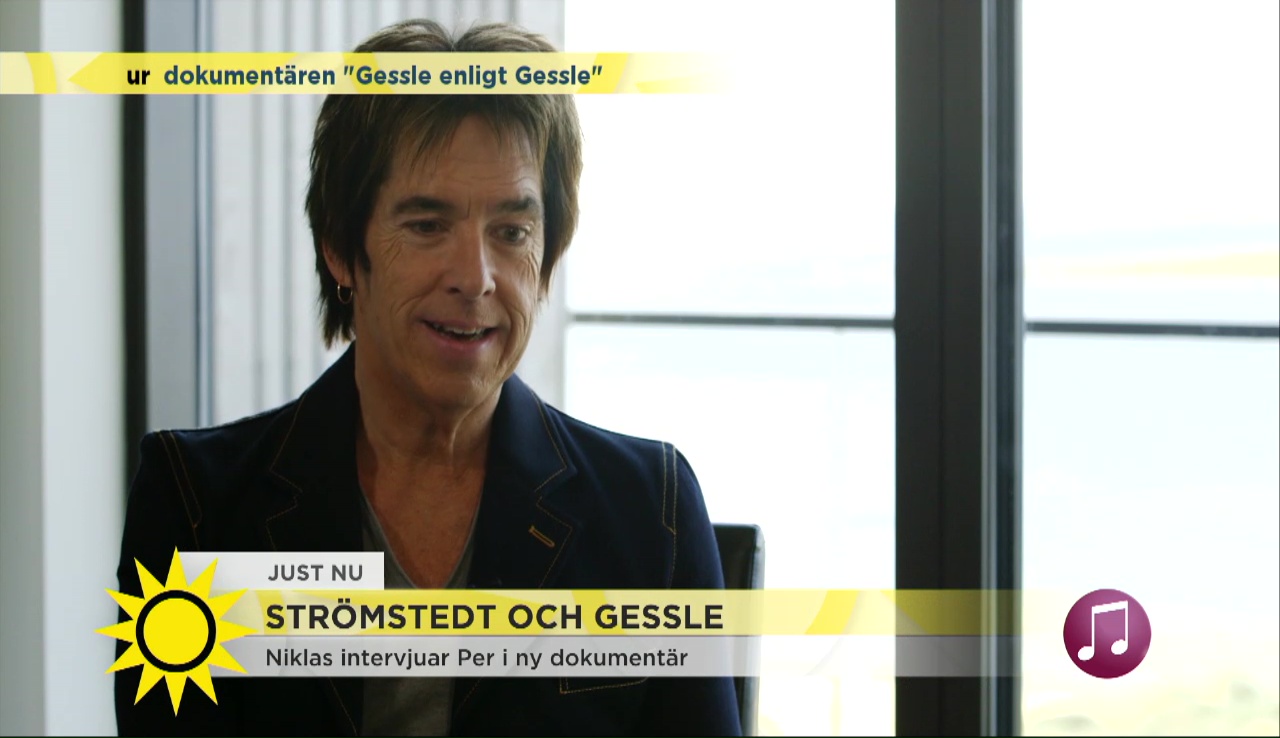 Niklas and Per know each other since long. An old picture from EMI studio was shown, it was from the times when they recorded Gyllene Tider’s first record. Niklas was there and Lasse Lindbom as well. Jesper said it was before GT’s breakthrough and asked Niklas where he was in his career at that point. Niklas said he was making demos, actually, also with Per and MP and he almost was there to get a contract with EMI too and they recorded ”Glitter, glögg & rock’n’roll”, the album with various artists at EMI. A short part of the song ”Da’n före da’n” (Niklas Strömstedt & Gyllene Tider) off that album was played on the show and PG was ”dancing” to the rythm while stitting, as well as playing the air piano. 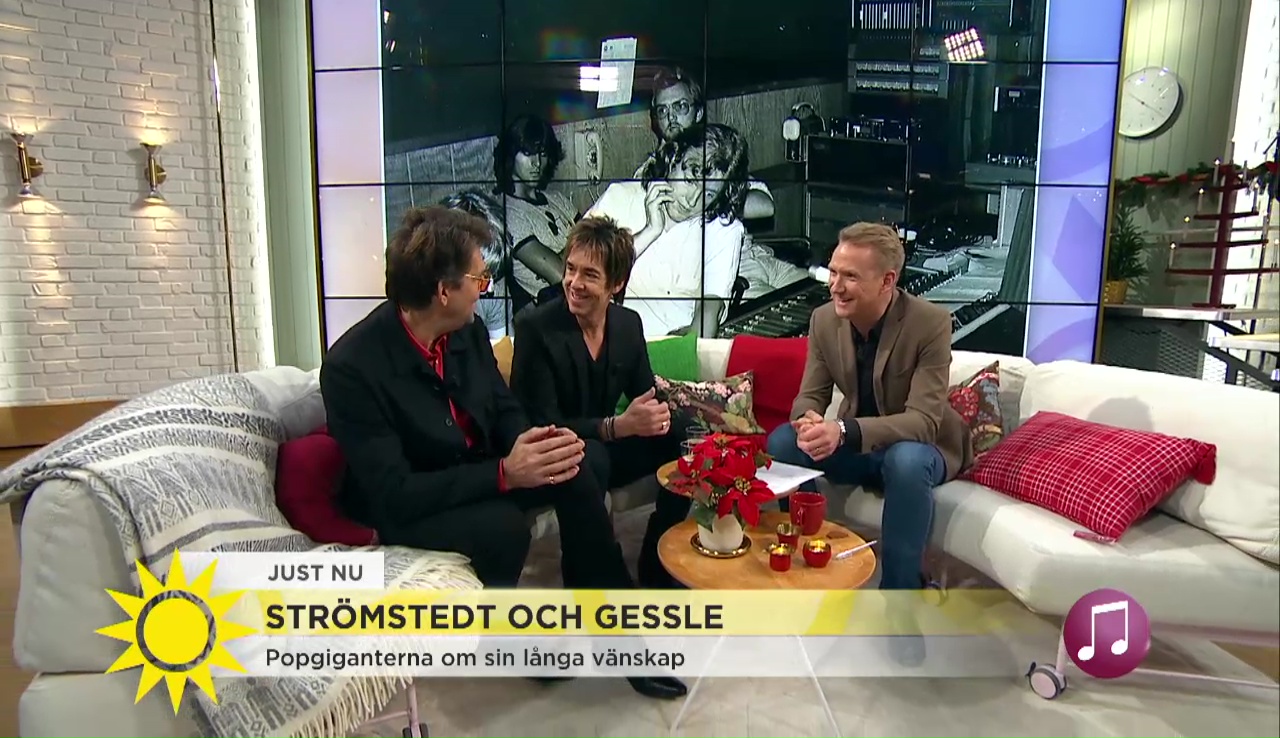 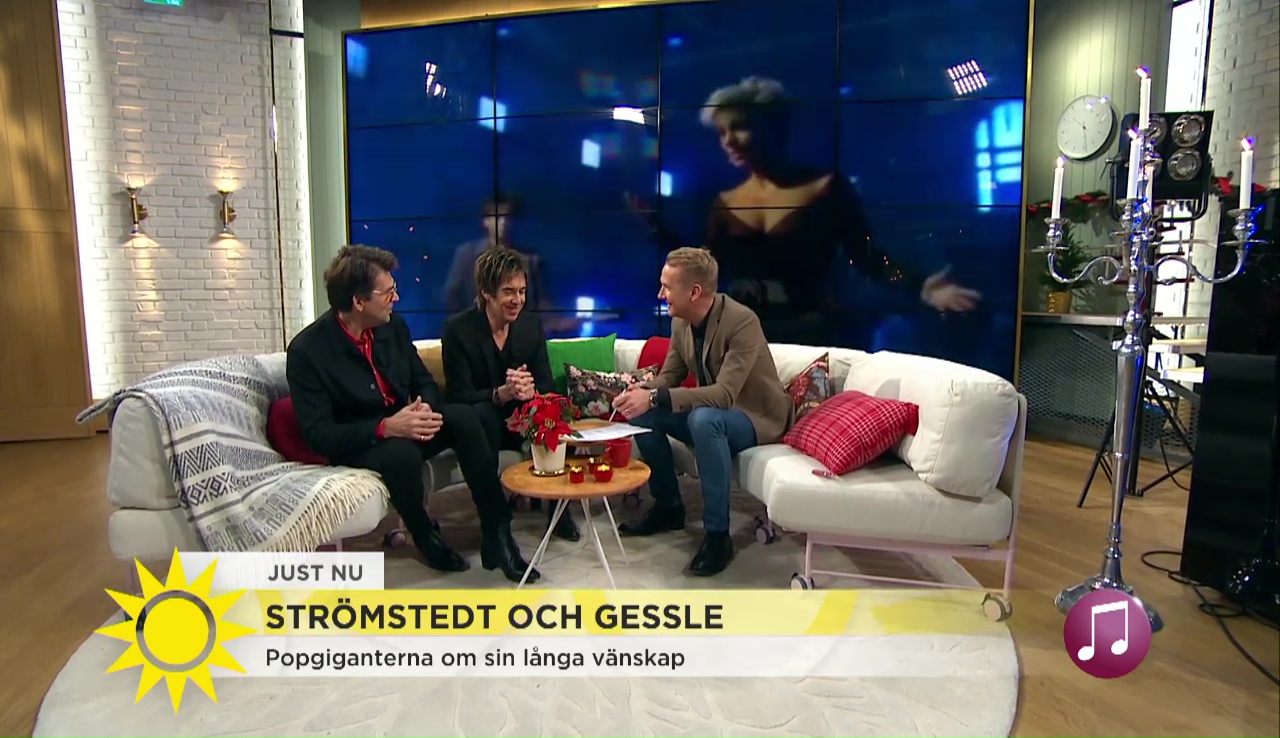 Jesper asked Per if his career is different in Sweden and abroad. Per said in Sweden it’s more about Gyllene Tider and Per Gessle, while internationally it’s more about Roxette. Jesper asked him if anyone abroad asks questions about Gyllene Tider. Per said no, they don’t even know anything about it. Except for hardcore fans. To journalists he often talks about how it all started with Gyllene Tider, because most of them abroad think ”The Look” was the first thing that happened in his career.

A tiny part from the upcoming documentary was shown. That’s about Per’s troubadour era and he is telling the story of waking up a man from coma with their music back then. 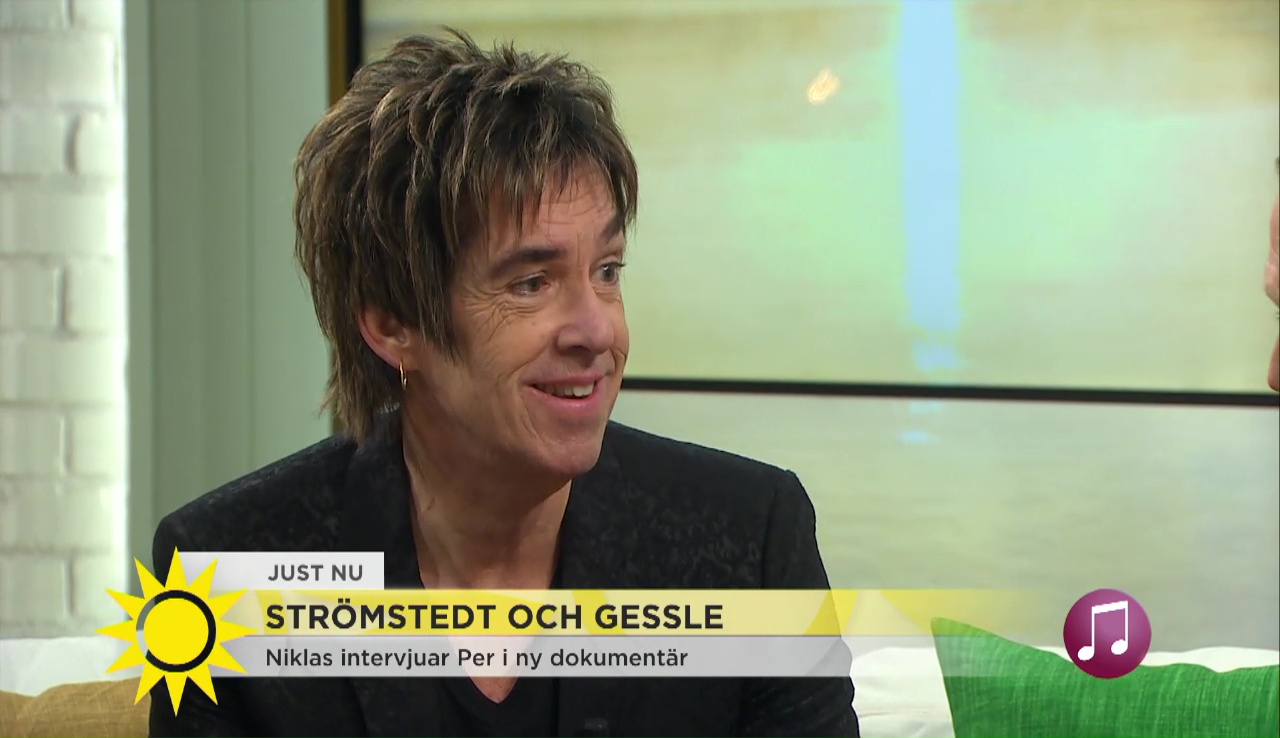 Niklas and Per met a lot during GT times, they toured and wrote songs together in the beginning of the ’80s. Niklas said he always liked PG’s songwriting and knew Per was capable of writing hits and if it worked in Sweden, why it wouldn’t work abroad. He thinks Per and Marie together were perfect, so he wasn’t surprised about their success.

Jesper asked PG what he sees when he looks back on the past 30 years. Per said he is of course very proud, but surprised at the same time that it all became so big, also in the US. Jesper asked Mr. G if he is still as eager to write songs as before. Per said he always tries to do what he really wants to. It’s also nice to cool down a bit, what he did via his Nashville project and try out new things. Niklas said they were thinking if they could come up with someone who wrote a real big hit after becoming 60 and they couldn’t find anyone. Niklas thinks in a songwriter’s life there is one period when he burns on top and then maybe other things come in the way. Per said pop always reflects its own time. When making pop music today, he can make it from his ’60s-’70s roots and producing it in a modern way. Working with young people maybe. His musicality is naturally not from today, it’s from the past.

They talk about Christmas songs and this way also a bit about 30-year-old ”It Must Have Been Love”. Per mentioned the text change from Christmas day to winter’s day and it becoming a soundtrack song to the movie, Pretty Woman.

Jesper said it was nice meeting PG again. Per said it’s always fun to be there.

Niklas performed ”Tänd ett ljus”, a very popular Christmas song he wrote together with Lasse Lindbom and Jesper asked Per after the song what he thought about it. PG said it was amazingly good. 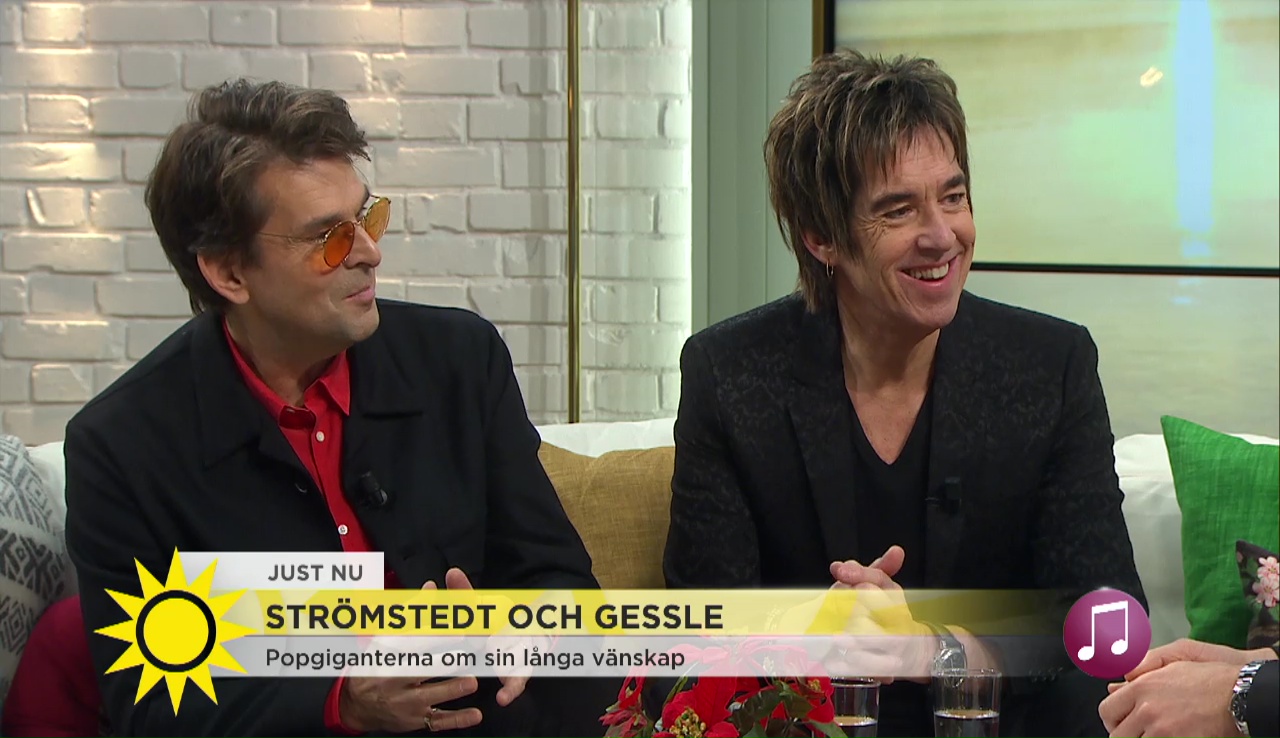 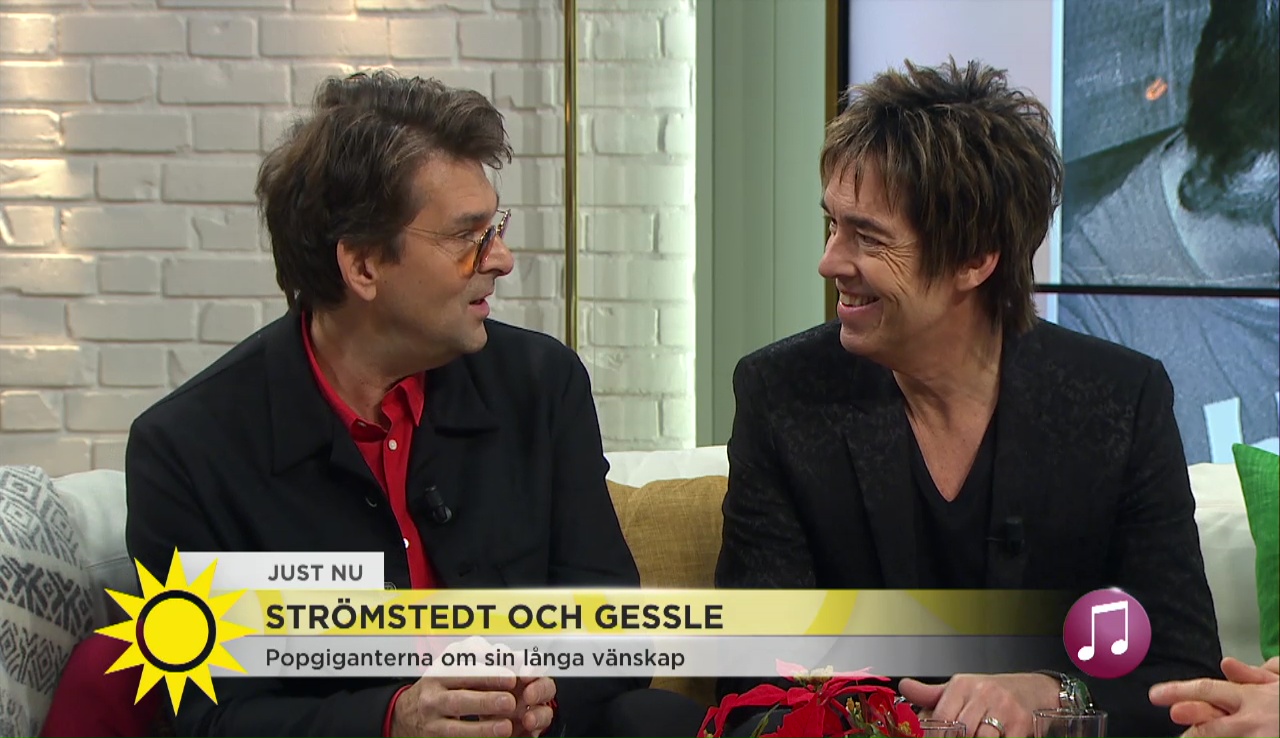