Marie Dimberg and Per Gessle launched the label Space Station 12 in February 2016. Since then, three artists have released their single at SS12. You may have seen Per posting about SS12 on Facebook quite frequently this year, so we thought of asking Marie D. and Per a bit more about the company.

Judith: When did you have the idea and how did it all start?

Per: The music industry is changing so much at the moment I felt like I, before I go to sleep, should take part of the new revolution. There’s a window at the moment for indie labels. And for indie way of thinking. I like that.

J: What was your motivation?

P: Same as with everything else in my musical life; to take part of music that I like and enjoy.

J: What do you want to achieve with SS12?

P: A great logo and a few gold records.

J: What are your tasks/responsibilities?

Marie D: I run the daily operations with my team Lotta and Josef and we work together with our great license partners at BMG. We also have independent press- and radio people.

J: What is the story behind the label’s name?

P: The name comes from a Montrose-song, “Space Station #5” but I thought 12 was cooler since it’s my birthdate.

J: So far, 3 artists have released their latest singles at SS12. Their styles are rather different, who is involved in the A&R process and how does it work in your case?

P: We all are. But I have the last say. If I don’t like it, we won’t release it. But I’m pretty easy to convince.

MD: We all listen and try to convince Per if he doesn’t agree…! A good song, a great voice and an artistic expression are of course key ingredients. No matter what kind of “genre”

J: What are your main criteria when picking an artist up?

J: Why did you choose these 3 to start with? How did you discover them?

P: Alex was number one. He’s the best songwriter I’ve heard in years. He wrote “Sinking Deep” for Fanny. That’s how Fanny came aboard. She turned out to be a great communicator with an interesting voice. Good Harvest stand for something a little bit more “classic” and organic. That’s very rare to find these days. They’re amazing.

J: Marie, you mentioned that Fanny’s single has almost reached 400.000 plays on Spotify, which is amazing for a new artist. How are you promoting the artists? What are the target audiences and countries?

MD: We start with Scandinavia as a home market but make the release available worldwide digitally. Together with the BMG team, the press- and radio people we try to get exposure wherever suitable for each individual artist.

J: The three artists are rather young and newcomers; are you focusing on this kind of artists or are you also looking to sign up established ones?

J: Per, you co-wrote the lyrics of Alex Shield’s and for what I understood from an interview with him, the song was finalised and has been released as a single because of this.

P: Yes, I co-wrote the lyrics and the music to “New York City Ways” but that’s not the reason it was released as a single. Who writes the song doesn’t really matter. What matters is if it’s a good record. It has to communicate.

J: In what way have you been involved in the final results of (so far) the singles? Do you get to give input / feedback during the recording/composing process or final outcome?

MD: Per’s input is extremely important given his long and successful career both as a songwriter and an artist!!! In my mind, it’s a fantastic opportunity for young artists to have an artist/songwriter of Per’s magnitude as your “wingman”

J: Are more songs co-composed by you planned?

P: I’ve written quite a lot of songs together with Alex which are really cool. You’ll see.

J: What are SS12’s plans for the future and what is in the pipeline?

MD: We’re currently focusing on these three for the rest of 2016. There will be a new song by Good Harvest released in December penned by themselves; “Charly”. They will also perform at the Eurosonic in Amsterdam. Alex “New York City Ways” will be accompanied by a lyric video this week. Fanny is writing and recording and will make her first performance at Musikhjälpen in December.

If you want to know more about the three great artists go on reading. 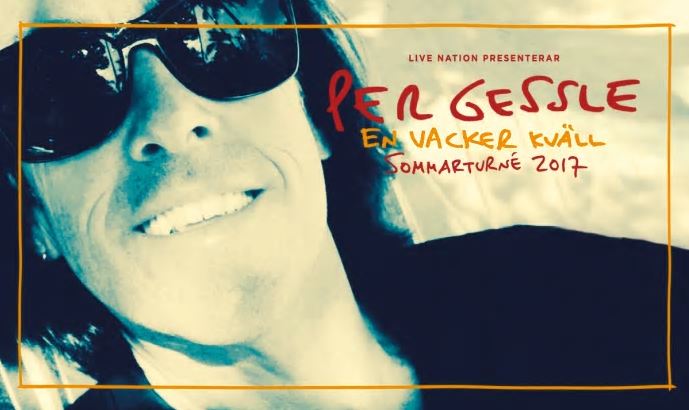 Just in! Per is going on tour next summer! A new album is also on the way.

En vacker kväll. Sommarturné 2017 is the name of the tour. Tickets go on sale on Thursday November 24th. Here are the dates.

English:
It’s time to take a musical selfie!
I’ve been writing songs and has been an artist for 37 years. Clearly fortunate. It has been three different careers. One of Roxette, one with Gyllene Tider and solo. All three are different but as close to my heart and bear my personal DNA, and now, in summer 2017, I thought to make a mix and play songs I’ve written that have a special meaning for me. From Roxette, Gyllene Tider and from my solo trip. It feels right. And the right time.

It is ten years since I did a Swedish album and a tour in Sweden alone. Hope to see you somewhere in the beautiful summer.

A new album will be out in spring 2017. Per comments: “I recorded it in Nashville, I was there for a month and recorded it. It doesn’t mean that it will be a country album, but of course there will be influences from Nashvile in the arrangements and feeling. One can say it is the small cousin to Mazarin.”

The third artist to release music on  Space Station 12 is Alex Shield, who has released two singles so far: Staying Alive and New York City Ways.

The text of the New York City Ways has been co-written with Sofie Bonde and Per Gessle, as he himself mentioned on a post on FB.

If you like both songs, you have something to look forward to, as Per also informed that Alex’ album will be out “soon”.

Per’s latest posts made many fans wonder what Mr. G is cooking again. First you see him posting a video, getting ready to work with Clarence. In a different time zone. Okay, it’s music in the making, not just a random holiday. Then bang, there is a Sunday selfie with Anders Herrlin, Clarence Öfwerman and Per. Anders? Hm hm… Then it comes to your mind that Anders is very much into soundtracks and you remember Per said in an interview quite some time ago that he is working together with Jonas Åkerlund again on a soundtrack for Jonas’ new movie. Jonas is indeed working on a new film. The title is Lords of Chaos and it’s based on a true story. It was announced already in May 2015 that Jonas is directing this movie, but the shooting was a bit delayed for whatever reasons. Now it seems Mr. Åkerlund is very busy with it and the project is in pre-production phase.

Back to Mr. G’s new dice, the storyline on IMDb states: A teenager’s quest to launch Norwegian Black Metal in Oslo in the 1980s results in a very violent outcome.

Black metal… Aha… What does Per have to do with black metal??? Oh my… Then ooops, he posts a picture of Christoffer Lundquist and Clarence Öfwerman hanging out with a cutout Alan Jackson (famous country musician) and he writes ”Chris, Anders & Clare preparing yet another heavy metal arrangement.” Heavy metal… so why Alan Jackson? Just to confuse us… Oh, Alan Jackson has a good-looking country bar in Nashville.

Back to the movie. You check anything related to the ”music by” section of Lords of Chaos, but all you can find related to sounds / music so far is that Mattias Eklund’s name is stated as re-recording mixer / supervising sound editor. Mattias was there to edit sounds for Small Apartments as well. You know, the movie with beautiful soundtrack music by Per Gessle.

So is Per making black metal music together with Anders, Clarence and Chris? Or are they all there in Nashville for country music only? Haha. This guy is certainly not running out of projects. Good for us!

Update on 2nd November 2016: Helena Josefsson joined the gang in Nashville for 3 days & they are recording together with Jessica Sweetman (British singer / songwriter). Jessica says: “Yesterday [1st November] I was recording in the Blackbird Studios in Nashville with Per Gessle from Roxette. I am so happy that I am going to be featured on a song of his that he is releasing next year. Per and his team are such wonderful souls and incredibly talented musicians. I feel blessed I have had this opportunity of collaborating with them on this project.”

Update on 5th November 2016: Drummer Elizabeth Goodfellow joined Per Gessle & Co in Nashville. Elizabeth also worked together with Helena Josefsson and Christoffer Lundquist at AGM a month ago. Elizabeth says: “Just wrapped up tracking drums for Per Gessle! It’s an honor to play for a songwriter I listened to on the radio since before I can remember. So grateful to keep growing and learning. Thank you!”

For obvious reasons, during the past few months there weren’t as many plectrum updates as used to be, but then in July something popped up on a certain Instagram account. Per Gessle posted a picture of a guitar pick saying ”New guitar pick, flipside!”. We all started wondering what the text (What’s been played with this pick stays with this pick) and sealed-lips emoji on the plectrum could refer to and it didn’t last too long to find out it had surely been produced for private gigs.

We had to wait 2 months to see where the pick was used and it turned out it was the only occasion Per played it. It happened at a birthday party at A.b.b.e.y. R.o.a.d. S.t.u.d.i.o.s. Wow! It must have been an awesome feeling to play at such a historical & magical place.

What the pick (1; 2) says is not completely true though. Of course we don’t know the full setlist, but we know the band played The Look and more importantly, they also played Här kommer alla känslorna (på en och samma gång). Huh? Who would have thought that Per would EVER play THIS song at THAT place? Yep, it was a Swedish business man’s birthday party after all, but still! It’s just amazing!

Fortunately, Mr. G was generous enough to share the pick with the greatest plec collector among Roxers, Sandra Knospe and this way the PLECtionary could be updated. Woohoo! Check it out!

We asked Sandra how she feels about having this item in her collection:

I remember that Per mentioned in the interview about the guitar picks, that he considers it a mission to help me find Plectrum-Nirvana. And I also remember how shocked (in a positive way) I was when I read this back then. That alone was more than I ever could wish for. Of course I didn’t dare to believe that he actually would make it true. But he really did. More than just once. And I still can’t believe it. I am so happy and grateful that he helps me to keep the collection complete. And it also makes things so much easier. It sometimes is like pulling teeth if you try to swap a missing pick with somebody, esp. such rare ones that have not even been played at public events. So thank you again, Per, for being such a kind person and also for making the hunt much easier. I can’t find the right words to explain good enough how much I appreciate that. But I so do!!!

Huge thanks again for the updates, Sandra and much appreciation to Mr. G for making it possible!