Did you know? 2 extremely important Roxette songs were written on this day 27 years ago. Yeah, Per Gessle, the 8th wonder songwriter wrote Joyride and Spending My Time on the same day. Isn’t he a genius? I mean, look at these 2 songs. Both of them are masterpieces and he could just come up with the power pop song in the morning and the big ballad in the afternoon. He is second to none!

Per says about Joyride:

When I wrote this one Roxette was sitting on top of the world. Three number ones in the US already and more to come. It felt like nothing could go wrong, I was full of self-confidence and every song felt so easy to create.

My wife (then girlfriend) left a note on my piano saying in Swedish: ”Hej din tok, jag älskar dej!”, which means ”Hello you fool, I love you!” It just had to be a chorus.

The writing process went very quickly. So fast I actually wrote ”Spending My Time” together with MP Persson the same afternoon. Hallelujah!

On The Per Gessle Archives you can listen to 2 demos of Joyride: first a less produced, acoustic Joyrider recorded on 22 May 1990 at T&A and a lot more produced Joyride recorded on 23 May 1990 at T&A. Listen to Per and Sven Lindström talking about the demos HERE.

Per about Spending My Time:

The music to ”Spending My Time” was cowritten with my old chap MP Persson. We finished writing it the very same day that I wrote ”Joyride”. Must’ve been May 1990.

I liked the idea of writing a lyric that starts in the morning and ends at night. This was my humble attempt. Great vocal performance by Marie and a super production from Clarence made this one a winner for Roxette.

On The Per Gessle Archives you can listen to the demo to Spending My Time recorded on 24 May 1990 at T&A. Listen to Per and Sven talking about the demo HERE.

I knew we had a great song (MP and I wrote this one together) but the demo always sucked!!! I couldn’t sing it very well, I don’t know why. It was always meant for Marie. She did a tremendous job delivering it. I’m sure it would have become a Top 5 song in the US if EMI wouldn’t have scrapped the entire company and sacked 122 people in the middle of marketing this one. People loved it but radio never got the chance to catch up. The Music Business. You win some, you lose some. 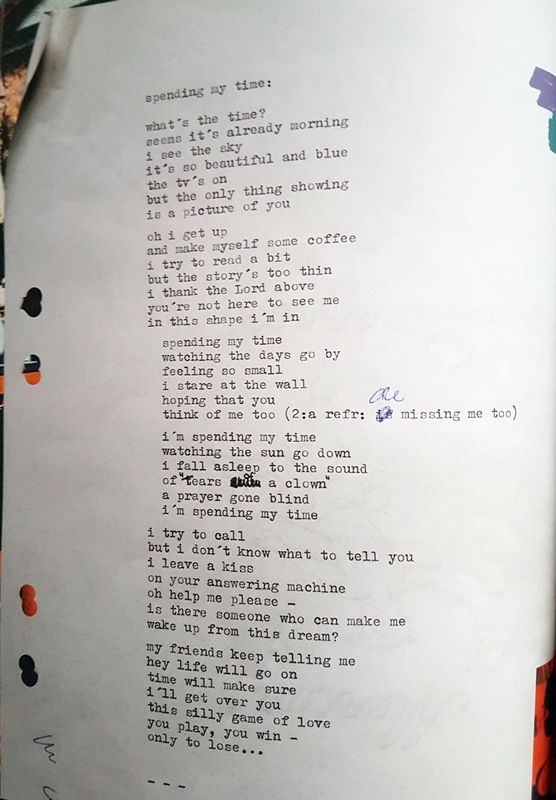 Pics are from ”Songs, Sketches & Reflections”.

Per’s quotes are from his book ”Songs, Sketches & Reflections” and the demo conversations from The Per Gessle Archives, as well as the PG about songs section on RoxBlog.

Just like we did the poll with the studio album covers, some days ago we asked you to tell us which you think was Roxette’s strongest ever lead single off their studio albums. After checking all the comments under our post and on Roxette’s Facebook page, I counted the votes / mentions and voilà, here is the result. Is anyone surprised that Joyride is the absolute winner? I guess not!

27th February 1991 is an important date in Roxette’s history. Their strongest ever lead single was released that day. Per remembered its 25th anniversary on Facebook the other day:

25 YEARS AGO TODAY! This little baby was released as a single. Fab! /P.

The hit is so strong it became Roxette’s 4th US No. 1 and Joyride, the song itself and the video to it made a tremendous amount of people join the joyride and fall in neverending love with Roxette. I’m also one of those Roxers. As we know, there are many to thank for this hit. Paul McCartney, John Lennon, Åsa, the 1991 Rox gang, the engineers, the studios, etc., but most of all, Per 8th-wonder-songwriter Gessle and of course Marie. Aaah… 25 years! Time flies when you’re having fun!

Judging by the comments, I would say the rest of the lead singles are rather personal favourites. Most Roxers agree that Joyride is the strongest from several points of view, but some fans prefer another single because they became a Roxer thanks to another one or they have nicer memories related to another certain lead single.

Sleeping In My Car is a strong 2nd and How Do You Do! has a safe 3rd place. Dressed For Success is at No. 4, but right after it comes Wish I Could Fly. Neverending Love and She’s Got Nothing On (But The Radio) got almost the same amount of votes and The Centre Of The Heart is not far behind them. It’s Possible is a catchy song, but it ended up at the last place as a lead single.

As you may noticed on Facebook, “Joyride”, the album, celebrated its 20th birthday yesterday. It was March 28th, 1991 when the best selling Roxette album to day was released. To celebrate this anniversary we have two special gifts for your prepared by Leonardo Gonzales of Gessle.net

Attention! It’s almost the same “Joyride” clip as the one which was broadcasted on Avro TV. The only difference is that Avro TV showed Antwerp stage + Rotterdam audience and EEN – Antwerp stage and Antwerp audience. The same happened with “The Look“.