As The Daily Roxette reports, the upcoming Roxette album got moved from end of this year to early 2011. The recordings go well, but they plan to have a summer break (where they’ll perform live around the Baltic sea) to resume recording until October. The actual plan is to record 16 songs with the first single to be released for Christmas 2010.

Comment: In my opinion that’s a good decision!
– The current EMI turmoil could lead to a quite insecure release/promotion situation this year. EMI was rumored to have postponed the next Coldplay album for example.
– The pre-christmas market is always very crowded with album releases. Nobody knows if Roxette’s name is still big enough to gather enough attention between such a huge competition. Roxette have a good history of winter/spring releases (all studio albums except (POP and LS).
– Judging from previous release interviews they always got fresh inspiration through a recording break.

Per and Marie are in the studio together again. They spent a day at Stockholm studio Atlantis, where were recorded albums “Have A Nice Day” and “Room Service” back in 1998 and 2000. It takes 10 years to see them working there again. Marie joined Per in the studio for the first time since Night Of The Proms tour completion in December after almost two months long break. Per commented this on Twitter and Facebook and wrote that ‘Marie’s voice = splendido’. He also promissed new videos for soon. 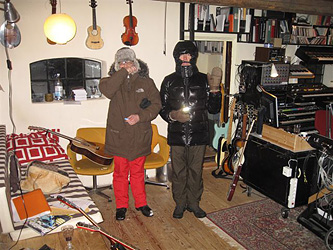 Per keeps his nice habits and provides us newsbits and even photo/video material from the studios where Roxette’s brandnew album is being recorded. The first RX/PG album recording we can follow so close!

Check out the fresh material on roxette.se!