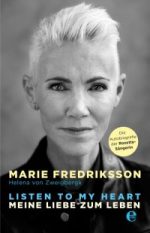 As already announced back in May, Marie’s biography is about to be released in German in Germany, Austria and Switzerland by Edel Germany. The final release date has now been set to November 21st  (the book can already be found in some stores in Germany though).

The biography “Listen to my heart: Meine Liebe zum Leben” has been translated by Ulrike Brauns and is 256 pages long. You can preview the first pages of the book (in German) here. A digital version is also available.

Fans can look forward to the biography as it was in Swedish plus a new chapter written in summer 2016 after Roxette decided to stop touring (Kirsten posted a translation of the chapter on our FB page) as well as new/different pictures that were not included in the Swedish version.

You can (pre)order the book on the following stores (many more available) or just walk down to the next book store and get it there on Monday.

You may remember the poll that we set up earlier this year to ask you to which languages Marie’s biography should be translated into.

Great news! Now we found out that the biography will be released in German on November 14th, 2016 by Edel Germany with the title ‘Listen to my heart.: Meine Liebe zum Leben’ (My love for life).

The book can already be pre-ordered on Amazon and any other German online book store.

Let’s hope it will be available in other languages soon!