Per Gessle and Sven Lindström partly dedicated the June episode of Nordic Rox on Sirius XM to John Holm, a great singer songwriter from the ’70s, who was really influential to lots of today’s artists.

The guys kick off the show with a new Swedish band, Diskopunk. They play Snake Oil. Sven says they got a quite interesting sound there. Per agrees. The next song is also a new one, No Hotel by Lykke Li. The third song is by ABBA, a band Per has heard about before. Haha. He tells he was in London just recently and checked out ABBA Voyage, the Abbatars. Sven is curious about how it was. PG tells it was fascinating. The first twenty minutes was amazing, because the technology is mindblowing. After that it was a little bit like same, same. As a concept, it was really interesting. Mr. G thinks it’s a very nostalgic thing to see and hear them in their twenties on stage, even if they are avatars. It was really mindblowing. He understands why people reacted the way they did. It was a really great reaction. At the same time, you can’t compare it to a concert, because a real concert is all about the energy between the crowd and the artist and the artist feeds of the energy from the crowd and vice versa. Since everything is pre-recorded there, it’s just static. So no matter how people react, it’s exactly the same show everytime. That was the negative thing, but as a concept, it’s very interesting and Per is really glad that he went to see it. Sven asks if there is any special highlight Per would mention. Mr. G says he can tell it wasn’t the wine in the bar. Haha. The guys are laughing. Per tells they played a lot of songs he really likes, e.g. S.O.S., which he thinks is one of ABBA’s best songs. The whole show started with The Visitors, which Per thinks is a great track from the late period of ABBA. Sven tells it’s 50 years to the day when one of the first tracks, People Need Love came out. Per tells Sven „it’s your favourite track, right?” Sven laughs, „it’s not my favourite track. And I know it’s certainly not your favourite track either.” So the guys pick another song, Honey, Honey. Mr. G thinks it’s a real bubblegum thing from 1974. For some reason, he always loved this song. It sums up the very early part of ABBA. It’s hard to resist. It’s his guilty pleasure.

Next one is the comeback song of Sahara Hotnights, Gemini. It’s from their new album, Love In Times of Low Expectations. Sven asks Per what he thinks about this album title. PG thinks it’s a long one, but he loves the song, Gemini. It’s a great one with great production. He always liked Sahara Hotnights, they are doing good things. Sven says it’s nice to have them back.

The guys zoom back in time and warn the listeners that this will be a Swedish singing only artist, John Holm. Not to be confused with ’70s porn star John Holmes. It’s a dangerous name as an artist, Per says. The only thing they have in common is that they were both active in the ’70s. That’s what they know about, Per adds. PG spent hours and hours listening to John Holm in the early ’70s. Sven is curious what was it that struck him so hard with this guy. Mr. G says first of all it was his voice. He’s got a very special voice and the way he pronounces the lyrics is very special. The lyrics themselves are amazing. He is a very good writer. The first three albums he did were quite big and very influential on lots of artists from Per’s generation. It’s coming from the singer songwriter tradition and sounds very early ’70s, the whole thing. Later on, when PG started working himself, everyone was talking about that he had a strange voice, so he got a great self confidence, because John Holm also had a strange voice. Per identified with it. Sven says John used it to his advantage, he sounded like nobody else. Per tells that a couple of years ago, in 2016 he was in Nashville to record some solo stuff and when he came back, he invited John to join him on one of the tracks and they did a duet. It was amazing to work with him. He is a little bit older now, but of course, he’s still got that magic voice. The first track the guys play is taken from John’s debut album, 1972. Sommaräng is John’s best song, Per thinks. It translates to Summer meadow. If you understand the lyrics, you realize that it’s really beautiful.

PG tells John Holm is a magnificent artist from the ’70s. Sven tells when Per made his first solo album, he picked a song by John to cover, to kick off the album. This is the first song from the first John Holm album, Sordin. For Per, Den öde stranden has always been a stand-out track. He did a version of it with his band in 1983 – „shit, that’s a long time ago”, he says. In those days you played cover versions of your favourite songs just to show everyone where you come from musically. They played Blondie and The Byrds tracks with Roxette. Then when time went by, there were so many cover bands around, so it became a no-no to play cover versions for some reason. But anyway, Per recorded Den öde stranden for his first album. He thinks it’s a beautiful song and it’s got a great guitar riff. The title means The lonesome beach. Sven thinks it’s very poetic and he finds it interesting that Per and his Swedish band, Gyllene Tider were a power pop band, but when PG made his solo album, he chose John Holm, because he wanted to emphasize his more folky singer songwriter side. PG confirms and says it was a singer songwriter album. He wanted to do something different. There is no point in doing another power pop album if you’re still in a band, so he wanted to show another side of himself. That’s a good thing to do. If you are into so many different styles of music, it’s nice to have different branches on the tree. Especially if you are in a band. There are so many people who have their say and that means a lot of compromising. So sometimes it’s great to do things on your own and do something different. Here Per’s cover of Den öde stranden is played instead of John’s original.

The third pick by Per is his favourite from JH’s second album. It’s a duet, Maria, många mil och år från här, which translates to Maria, many miles and years from here. It’s got a great atmosphere and John’s voice is just amazing. When Per was listening to it back then, in 1972, he was in his early teens. Sven wants to know how it was the split between listening to this kind of singer songwriter stuff as opposed to harder, rocking, power pop stuff. Per liked both. He liked the singer songwriter movement a lot in the early ’70s even when he was young. Cat Stevens, Paul Simon, James Taylor, Carole King, Joni Mitchell, all those artists. At the same time of course he loved the glam rock, David Bowie, Sweet & Slade. There were English bands that were big in Sweden at the time. He liked the prog rock, Aqualung by Jethro Tull, Led Zeppelin, Black Sabbath, Nazareth. In those days you had so much time to listen to music, because that was the only thing that was around. Sven asks Per if it was his John Holm side that came up when he was sitting with his acoustic guitar in his boy room. PG tells when he started playing it was easier to just play the guitar and sing folk songs. He listened a lot to Swedish folk music from the past as well. What is interesting in music from the Nordic countries – the same goes for Northern England and Scotland – is that old folk music is really beautiful. Those melodies are in Per’s DNA. When he started writing songs himself, it was all about melodies. Per thinks if you ask Benny Andersson from ABBA, you’re gonna get the same answer. It’s in his blood to write melodic music, because that’s where they come from. When Per started out playing himself, it was very close to the singer songwriter tradition. Sven asks „but you wouldn’t bring an acoustic guitar to a Nazareth audition?” The guys are laughing and Per says no. Per loves Nazareth too. Razamanaz is an amazing album. Here the final track by John Holm is played, Maria, många mil och år från här.

The next song, How Do You Do! by Roxette is picked by Sven. It’s the lead single from Tourism, which celebrates 30 years this year. Sven asks PG what he remembers about writing this one. Mr. G wrote this for the summer leg of the Join The Joyride World Tour, which lasted 18 months. It was a very long tour. He wrote it in the spring and recorded it as the first single to be released in the summer of 1992. It was a huge hit for them, especially in Europe. In Germany it was No. 1 for 16 weeks or so. It’s got this little modulation. There is a key change between the verse and the bridge into the chorus to get the right key for Marie to kick in. The first time you hear it you just fall off your chair. It becomes like a gimmick in the song. They did that a lot. You had to balance your different keys, which is always tricky when there is a guy and a girl, but they did their best.

Bad Habit by Sofia Karlberg is next. The Two-Timing Touch and Broken Bones by The Hives is played. Such a great band, according to PG. The song is from their Tyrannosaurus Hives album from 2004. Popsicle from Sweden with one of their ’90s tracks, Sunkissed is next. Magnus Carlson, the singer of Weeping Willows is next with The Way of the Crowd. Per thinks he has a great voice and his solo project is always interesting. This song is featuring Trummor & Orgel and Sven thinks it’s cool music.

The guys say thanks for listening and Anita Lindblom’s Cigarettes is closing the show. 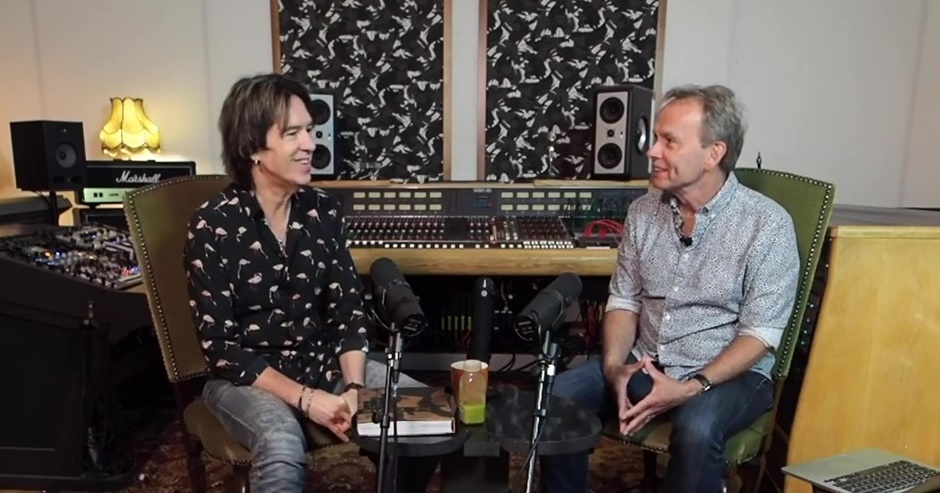 Still is from the Bag of Trix comment videos recorded by Anders Roos.

Thanks for your support, Sven!